Shaun was not up to the ride this morning, so I set off and left him at the campsite. We discussed what he would do, and he planned to go to the site in Consett and meet me there. I suggested that if he didn’t get any better over the next day or so, he probably wouldn’t want to keep moving camp. Off I went alone again – spurred on by the thought that Shaun may be better after a good day’s rest. Managed to lose my route within 100 yards of leaving the site. There was nothing that resembled a cycle path, so I decided to follow the A1 down to the point where the track crossed it. Instead, I followed it until the very next turning, which was signposted to one of the towns on my list. Followed a whole series of back roads – some more like farm tracks. Eventually found myself on some better roads, and took a huge climb up to, and then down to Rothbury. Another one of those benighted missed turnings, and then over a Fell. I don’t know which Fell, what it was called or why 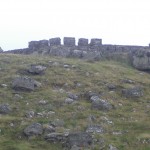 it was on my route, but there it was. Up and down, up and down, up and down. Sat at the foot of yet another hill, I spied the ruined something or other pictured here. I sat astride the bike and took a photo. No idea quite what was going through my mind at the time, but I looked down at my bike, and I said (quite without Irony, and definitely out loud) “A noble steed such as yourself needs a name. What shall we call you?”. Neither of us could think of anything suitable, so we agreed that we would pick a name from the roadsign at the next junction. Our hearts fell as we reached the next junction, as neither of us fancied “Morpeth” as a name, however the smaller sign right at the junction offered us “Cambo”. We agreed that this was a suitable name, and henceforth my bike was called Cambo and we had some in-depth discussions on many subjects. We cycled on with renewed vigour on nice backroads until my red line was pointing me down a lane with a “No Through Road” sign on it. This was one of Shaun’s routes – what was he doing to me? Nothing ventured nothing gained I followed the red line and it took me to a bridleway that cut quite a distance off the route by road. Good surface too. Well done Shaun – I must remember to congratulate you when I get in, remind me Cambo.

When we reached Matfen I sat on a bench on the village green and had a drink and a mars bar. Then headed once more upwards to Whittonstall. After this, and level with Consett, a “Bad Thing” happened. You must understand how the GPS works. It’s built into my phone and works very well, but if someone phones or sends a text message then the GPS screen is replaced by the message or the call. When the call ends, the screen goes back to GPS. Someone called. It was either Dad or Clare. We chatted, and then I set off again. Someone called. It was either Clare or Dad. We chatted, and then I set off again again. Someone sent a text. It was Shaun saying “How has the day been” and I replied “Sore” – I wasn’t feeling too talkative, as my route kept being obliterated by these people who didn’t care if I got lost. Someone sent a text. I exclaimed “For Pete’s sake – will you all just sod off and leave me alone”. Then I read the text. It was from Shaun, saying that they had sodded off and left me alone – they were nearly home, and I was still cycling. I was in bad spirits when I finally reached the A68 for the last few miles. This was a road from hell with too heavy traffic and too steep hills. I arrived at the campsite feeling very down after what had been mostly a good day but ruined about 5 miles from home. Clare had bought some beer on Holy Isle though, so this helped a little.