The hill that we had surveyed yesterday took us up to the high coastline south of Dunbeath. A great road for cycling on. I didn’t set off in the best of spirits as my alarm hadn’t gone off. I awoke to the sound of Shaun making himself ready. I got up in a rush and when we set off I had forgotten a couple of important things. My Tea Stool, and I hadn’t refilled the water that I carried for making tea. There was only enough for one brew. The first hill we had to climb – the one out of Dunbeath – we knew was visible from the campsite. We knew that the Wives would be watching so there was no chance of a push. We reached the top and cycled along a good flat road towards 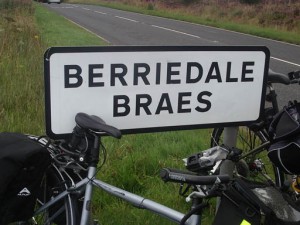 Berriedale Braes. Yesterday’s wind had abated somewhat so the cycling was much better. Berriedale Braes we knew would be a killer – a huge decent with 2 hairpins, followed by an equally huge climb. In fact it wasn’t really a problem, and we made it to the top with no issues. This was followed by the long decent into Helmsdale. A good long decent which allowed me to break the 30mph speed limit as we arrived in Helmsdale itself. At the top of this descent we stopped to take a picture of the Sutherland roadsign. Here we met a lady with her son. They were going the other way, but were able to give us favourable reports of 14th Man as he had been staying in the same hostel as them the previous night. They were followed shortly by a couple on a Tandem. They were the Lady’s husband and daughter. Their family holiday was to all do this. I was most impressed with this effort – the lad must have been about 14, and the girl on the tandem – maybe 9 or so. “Tandem Family” had lots of respect. After Helmsdale came Port Gower (which sounds like it should be in Wales). This is a stiff climb to a layby where we had Breakfast. We had brought bacon rolls with us. There followed a pleasant cycle along the coast into Brora and then Golspie. We stopped in Golspie for a cup of tea, and met 14th man again (but for the last time). The family also turned up, so we spent a while there. Then we set off again – next stop Tain. Tain is famous for the Glenmorangie distillery. At the side of the A9 is a large sign explaining the distillery. Also, the day we were passing, the distillery was working – you could smell the smell. I smelt the smell, and read the sign, and as a consequence, fell off the road. 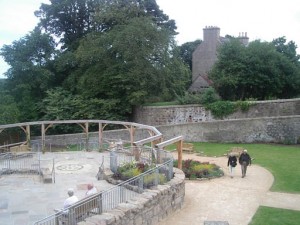 Once righted, we set off into Tain itself.

I have 2 memories of Tain. Theres a lovely garden where we thought we might have lunch. Alas – bikes not allowed. And 20p for a wee.

The last 20 miles from Tain to Dingwall was on the A9 – a busy road but quite quick. By the time we arrived at the campsite we were both ready to stop.