I like to know where I went, how quick I was and other completely useless stuff.  So I’m a bit of a magpie when it comes to apps for doing this.

So – to keep track of all this I use RunKeeper.  This is a website that stores GPS tracks and shows them on a map.  To get those GPS tracks to the website you need something that can create them, and then upload them.

Good News!  There’s a free app provided by RunKeeper that works on iPhones and on Android phones.  It’s available from whichever app store is appropriate.  It’s an accomplished piece of software that I’ve used for some time now.  It tracks where you went, how long it took, how fast you were, your heart rate if you have a HRM that can pair with the phone.

There are several others of note though, and my current favourite has to be Wahoo Fitness.  It has so many features that I don’t understand, but I use it for recording GPS tracks, tracking heart rate and showing speed/time etc.  I’ve paired this with the Wahoo Blue HR heart rate monitor.  So on the screenshot over to the right it’s showing the current workout total time, the current lap time (theres only one lap so they’re the same), my current heart rate.  Below this is current speed (showing — as I’m stopped) Average speed over the workout and a couple of other speed stats,  My cadence (which is blank as I don’t (currently) have a cadence device) and the number of calories burned. Heading is — because I’ve stopped, fastest mile is — because I don’t have the cadence/speed device.  Finally the Distances – total and laps. 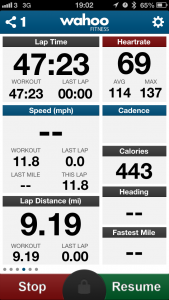 That should be enough for anyone but there are 5 other screens – one dedicated to Heart Rate, one that is minimalist and shows speed and time.  On top of these there’s an iPod control screen and a map screen.  Finally theres a screen that controls a Wahoo KICKR should you have one of those.  Each of these can be enabled/disabled and is available when enabled just by swiping the screen.

This is held on the bike in a small case on the top tube.  It has a clear plastic top so the screen is visible, and the touch screen works though it.  It also has space inside for a backup battery if that’s what you want. 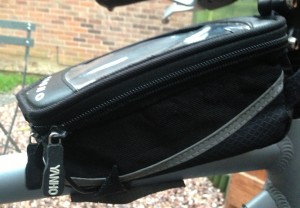 So, if you have an iPhone, you can get a powerful bike computer for no money at all (well, a couple of quid for the case above on Ebay).  You can then add other things to make it even better – Heart rate monitor, cadence/speed monitor, external display.

In a future post I’ll review Wahoo Fitness apps against the others that I use – Runkeeper, iSmoothRun and MapMyTracks.