Started later this morning. Shorter day, and Shaun took his bike off to a cycle shop in Pitlochry to have the tyre sorted. Once on our way we set off to Pitlochry, then straight through and, nearly at the A9, realised this was wrong. Went back and picked up route 7, which took us a hilly and circuitous route back to the A9, though several miles further on. It also deposited us on a really good cyclepath alongside the A9 which we followed for several miles before heading off towards Dunkeld – up another hill. At Dunkeld we restocked on Bananas and chocolate, then set off for Stanley – up a hill. Through Stanley and on to the A9 north of Perth, but lo and behold – another cyclepath following the A9 that took us to the outskirts of Perth, then on down the river and through the golf course (yes, really – a cyclepath through the golf course) to the centre of Perth and back to our planned route. Up another hill and we joined the hell that is the A912, right at its intersection with the M90. Survived this and followed the A912 on to Bridge of Earn and on towards Strathmiglo. The road was very very busy with lorries, but there were kids cycling home from school along this road. It could learn something from the A9. Anyway – after Bridge of Earn the A912 splits. The A913 goes to the East, and most of the traffic seemed to want to go that way. We followed the A912 south and realised why. It goes up. And up and up until it reaches Balvaird Castle. 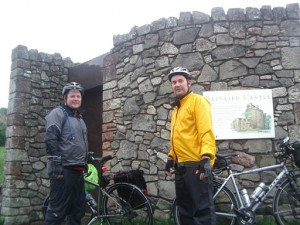 I waited there for Shaun to arrive. He was consistent when climbing hills. He was slower than me but never gave up on them. You used to be able to visit the castle, but not really now. Only if you book in advance. There was a pleasant looking Toilet but it was locked. Still, it made a nice Tea stop. After this was a grand descent to the A91 briefly, then back on to the A912 at Strathmiglo. I know several Straths. Strathisla (which is a pleasant enough Whisky), Strathspey (which is a quick sort of Scotts fiddle tune) and now Strathmiglo. I shall continue to play Strathspeys, and I shall continue to drink Strathisla. I’m unlikely to revisit Strathmiglo, though I recall it smelled as though it may have a nice curry house. On then to Falkland and up the last climb of the day, dropping back down to the A92 for about 2km, which really was 2km more than was sensible. We quickly left this and finally found Markinch and the campsite. This was only 6 hours but took over 8 hours. I was feeling a little uneasy that we would make it to Lands End at this rate. Shaun didn’t seem to be enjoying himself – concentrating as he was on the tarmac all the time, and going to bed very early each evening. This was bothering me slightly – it was supposed to be a challenge, but it was supposed to be fun.