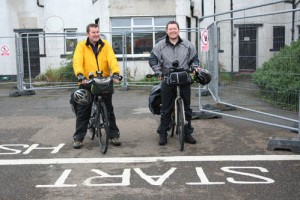 The morning dawned after a long night of Wind. The tents were blown and the kids woke up. I heard Shaun re-pegging his tent at about 2am. We got up at about 7am and it was still windy. By 8 the wind had dropped. Completely. No wind at all. Pouring with rain however. Clare asked the most stupid question. “Would you prefer rain like this, or wind like last night?” – see, last nights wind was from the South – this would have been a major headwind had it not stopped. Foolishly I replied “The rain is infinitely preferable to a headwind”. Instantly – not after a short while but instantly I tell you – the rain ceased. The sun came out. The wind came back. By the time we arrived at John o Groats it was blowing a hooley. We had some pictures taken, including the ubiquitous start line picture. The hotel behind us really needed some work doing – it was closed with metal fencing around to keep you out. Sad backdrop to the picture. We had our forms stamped at the “End of the Road Cafe” and then set off.

We fought our way to Wick, which was only 13 miles or so. The headwind was ridiculous. We would turn a corner and almost come to a stop. When we got to wick we saw our cars (which were in the care of our wives for the next 1000 miles) parked in New Look’s car park. So, this is how it was to be eh? We fight all day on a bike with the headwind, they shop.

Coming out of wick we met a chap – he was cycling along on a mountain bike, laden down with loaded panniers. He was heading to the same place as us, though would be taking longer. He seemed to have a slightly flat back tyre, so became “Puncture Man”. A little further on we passed another chap – younger and generally fitter than us, and clearly camping – “Camping Boy”.

As lunchtime arrived we found a pleasant layby to stop at, where we made some tea and 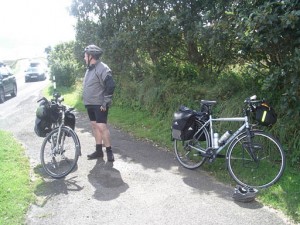 opened our Pasties – Pasties were the chosen meal for each day as we were heading for Cornwall. As we sat there eating and drinking, puncture man came up and stopped for a chat. He was on his 14th trip. We chatted for a while, and as he cycled off he was re-christened “14th Man”. We had a feeling that though he was older, less fit and on the wrong kind of bike, he was more likely to complete this than we were. He was taking 3 weeks, and seemed to have everything planned. He had had a sound breakfast at a weatherspoons in Wick. He suggested the Hotel in Lybster was a good place for a pint. The cafe just before Dunbeath was a good place for a cup of Tea and then he would end his day in Helmsdale and have Fish and Chips. We were only going to Dunbeath, and Shaun has learned from our training that he cannot cycle after Beer. We set off again into that headwind and made for the A9 at Latheron. From here it was just a short run of A9 to Dunbeath where we arrived at the campsite. From here we could see the ponderous hill that awaited us the following day.